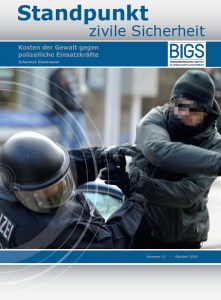 Violent clashes between law enforcement officers and their so-called police counterparts are frequent and harmful. Both in the context of everyday services such as traffic controls, as well as in special operations around major events, from the evacuation of occupied buildings to the deployment of special forces in situations that have already been assessed in advance as particularly dangerous, attacks on law enforcement and the use of direct force against their police counterparts occur time and again. The circumstances are manifold, as is the choice of means by police counterparts. The consequences range from harmless contusions to physical injuries with serious and long-term somatic limitations, mental illness, legal consequences for the participants in the dispute, and numerous indirect effects and consequences.

The latter questions can only be partially answered without having answered the former. Therefore, the analysis starts with an approach to quantitatively assess the dimensions of the problem. The present study deals with the estimation of the economic costs to society in Germany, both directly and as a result of violent clashes between law enforcement officers and their counterparts. No consideration is given to the appropriateness or legality of violent acts. The study is limited to the monetary quantification of the manifold consequences of the exercise of violence.