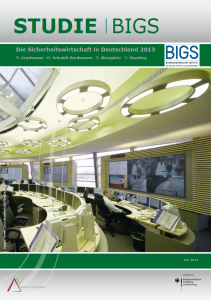 For the second time, the Brandenburg Institute for Society and Security (BIGS) presented a market analysis of the security industry in Germany, which was carried out in the course of the BMBF-funded WISIND project. The results show that the industry, which has already been dynamic in previous years, will continue to grow strongly: For this year, the surveyed companies expect growth of 5.6 percent on average and 6.4 percent on average for the coming years. While government spending on public security tasks – adjusted for inflation – has stagnated in recent years, the importance of the private security industry continues to grow significantly. The cybersecurity sector is growing particularly strongly. The companies operating in this segment expect average growth of 6.3 per cent this year and anticipate growth of 6.9 per cent in subsequent years – presumably also as a result of the “Snowden effect”. The trend towards the privatisation of security is particularly pronounced here. While the Federal Government is only planning additional expenditure of 29 million euros as part of the IT security law, companies and households are investing substantially in more IT security.