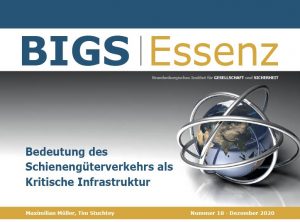 The worldwide outbreak of COVID-19 had a massive impact on the supply chains of German industry and in some cases even on the supply of the population with everyday goods. Global commodity chains were interrupted and thus the production and exchange of goods within Germany and the European Union became much more important. In this situation, the comparative advantage of railways as a mode of transport for freight and as part of combined transport became apparent. Rail freight transport has a well-developed network with almost comprehensive access to all transport sources and destinations.

However, taking into account the EU Directive 2008/114/EC (CRITIS), the question arises as to how the state can better fulfil the obligation of protecting critical infrastructures and whether a supply of goods via rail can be equally ensured in other disaster situations where demand in passenger transport does not decrease – or what measures are necessary from an economic and political point of view to ensure the supply.

Based on different threat scenarios, this brief study outlines the effects on the transport modes road, rail and waterways and determines the resulting need for action for rail freight transport. The terminals for multimodal transport are of particular importance in this context. Possible measures such as the provision of reserve capacities and thus the pricing of risks when determining the optimal utilisation of the transport networks or the creation of emergency schedules for freight transport that can be implemented immediately will be critically reflected upon.