The Hidden Cost of Untrusted Vendors in 5G Networks 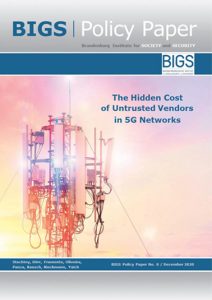 5G is considered a transformative technology that will soon be the basis of a high increase in productivity. 5G networks have started becoming available in several countries and are initially offering substantially higher download rates than 4G/LTE. In the future, however, further services will emerge from this new generation of cellular systems due to increased capacity, high speeds and low latency. Many existing industries will digitalise an increasing share of their value chain and run production and services over these mobile networks, thereby making 5G networks a quasi-supercritical infrastructure.

If untrusted vendors are to play a role in setting up 5G networks in Europe, considerable costs can be expected. Only some of these costs are incurred by the mobile network operators, who are – absent any further regulation – free to make their own decisions about their network providers. But many of the costs will be borne by other sections of society, such as telecommunications customers or taxpayers, who, without further regulation, have no input on the selection of network equipment provider. Additionally, some of these costs will only be incurred long after the network has been set up, leading to a risk that these costs will not be adequately taken into account in the initial investment decision.

In this paper, the authors explain why the security of 5G networks is of greater significance for the economy than was the case with 4G. They outline the costs associated with building networks using untrusted technology, and try to measure those costs where possible. In the appendix country studies are included for Germany, France, Italy and Portugal.