The Economic Costs of Illicit Trade 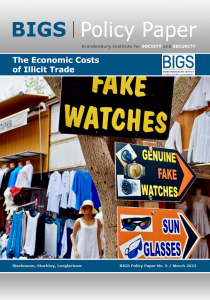 Illicit trade is often considered in terms of shadowy, small-scale, informal merchants and the costs of such activities, when considered beyond lost profits to intellectual property holders at all, are typically thought of via the lens of national accounting. Taxation and government spending are foregone and illicit purchases do not appear in official consumption figures, lowering reported GDP. Such estimates, however, estimate the impact on national accounting and not on economic activity more generally. In this article, the authors seek more directly to estimate the costs of illicit trade. Using coarsened exact matching and dynamic panel approaches to overcome the usual biases, they show that marginal increases in illicit trade are associated with reductions in economic growth, tertiary education enrolment and in research and development spending.